Nothing says America like the colors Red, White and Blue and the sounds of traditional American music, Dixieland Jazz, Americana Patriotic songs, and classic hits!
Vocalist and trumpet player Mark, and vocalist Kathy along with their stunning Rosebud the Roadster bring your Fourth of July, Fathers Day, Veterans Day, Grand Opening or Patriotic Theme event to life with all American music.
Whether their performing while in motion, or stationary, or performing from one location to another stopping at each location to perform, your community event or corporate party will be one that your guests will never forget.
Mark, Kathy and Rosebud specialize in interactive entertainment, getting  the audience involved with their music and performance.
Rosebud is a real head turner that adds the WOW factor to any event, as she proudly houses four state of the art  powerful speakers that can be heard from long distances.   She proudly displays her American flags along each side, and has flashing under carriage lighting to add to the excitement.
Reliable, experienced, polished and professional, they give your guest the ultimate, unique band on wheels entertainment.  They specialize in corporate entertainment, private parties, street parties,  country clubs, and charity galas. They can perform while stationary, mobile, or can move from one location to another, performing at each stop.

Performing over 120 events annually, their Band Source Productions, Inc. is fully insured and includes eight different bands, including their wildly popular Roaring 20s Band, the Z Street Speakeasy Band which is one of Florida's most versatile, prestigious, and sought after musical groups.
​
​ 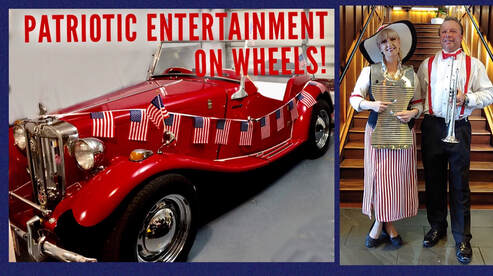